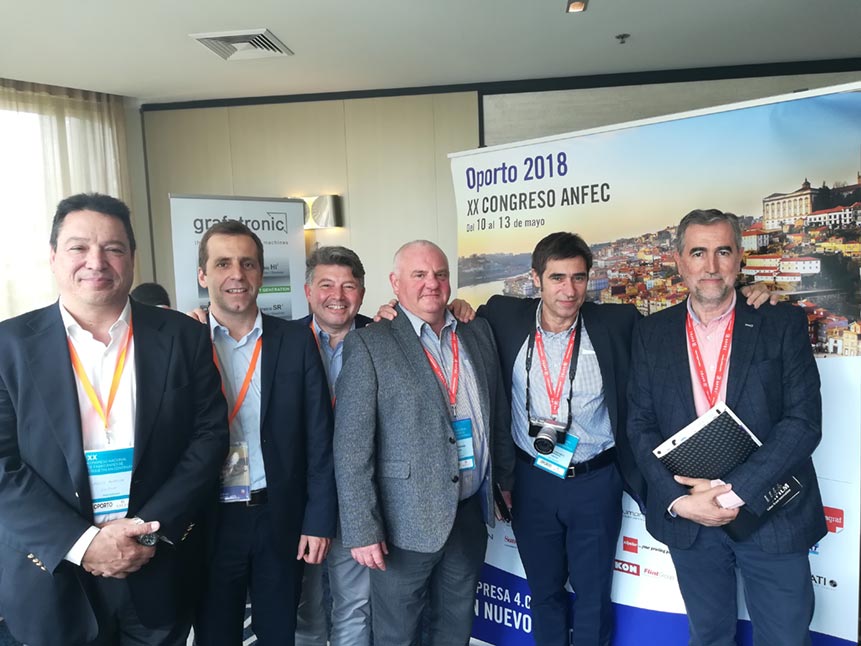 Last May the 20th ANFEC Congress took place in Porto, where both manufacturers and suppliers to the label industry had the opportunity to share different points of view about the market and the events in the sector.

As relevant data, we can say that the industry is in good health thanks to its positive growth, 7.39% compared to 2016 in consumption of self-adhesive material. Both manufacturers and suppliers agree on the good progress of the sector, which is translating into greater investment by printers in new machinery. Within conventional printing systems, the technology that has grown the most is flexography, with the acquisition of 25 machines, although as we have been observing in recent years, there is a clear trend towards digital technology.

One of the central themes of the congress was the move towards Industry 4.0 where industry professionals discussed the introduction of digital technology in the sector. This debate exposed the idea that today the consumer is much more demanding than a few years ago, so companies have to adapt to this change, listen to what the consumer needs and offer it to them with the best possible benefits. So for this, this adaptation to the digital age is relevant. At the inauguration of the congress, José Ramón Benito, president of the association, assured that “ANFEC has to be a beacon that shows us the way with its messages; and one is industry 4.0 ”

Following this thread, Joan Casas, manager of Graphic Systems at Fujifilm, also highlighted in his presentation the transformation towards digital that is being experienced in recent years. He also stressed the importance of efficiency in production costs, for which Fujifilm has developed a UV Led curing system, Illumina, in which, among many other advantages, a higher printing speed stands out, between 30% and 50% , a significant increase in production time due to the need to replace UV LED lamps or even reducing annual energy consumption, between 85% to 95% per machine.

Another example of process improvement is the Flenex FW plate, developed with water, which ensures the highest definition and ink transfer performance with processing times of 40 minutes. This flexo plate from Fujifilm enables printers to gain independence and speed in their printing department to suit the needs of their customers.

Another important change is that the association is renamed the Iberian Association of Label Manufacturers (AIFEC), integrating within it the sector of Portugal, with which links and the common market are shared. In the photo the Fujifilm sales team from Spain and Portugal

PrevPreviousTendency of the market in the flexible packing.
NextOur vision about the fair HISPACK- BarcelonaNext

When UV lamps are active, they generate a large ultraviolet radiation, in the necessary spectrum, initiating the chemical reaction necessary for the curing of an

We will exhibit at labelexpo 2022 Brussels

For the first time, ibeslab products and our solutions for flexography will have their own stand where our staff will be able to attend to

This phenomenon usually appears in some narrow web printing machines that work with UV inks. The viscosity of UV curing inks can cause the anilox

The demand for special effects in product packaging is increasing, seeking sensory experiences of the consumer when handling the product in a sales shelf, or

If you want us to contact you or have any questions we will be happy to assist you.